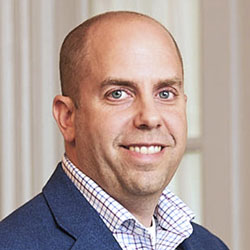 Since joining Michael Graves Architecture & Design in 2001, Matt Ligas has played an integral role in master planning, architectural design, interior design and management of a variety of projects in the United States and abroad. Currently the head of the firm’s Washington, D.C. office, Matt has become a leader in workplace design. His workplace experience is wide-ranging and includes headquarters offices, operational hubs, technology centers, small regional offices and securities trading centers, each of which has unique needs.

For the past five years, he has been in charge of a multi-phased 2-million-square-foot nationwide workplace transformation program for a D.C.-based financial services company. For its locations in D.C. and Northern Virginia, he played an integral role in programming and real estate analysis that determined whether the company would stay in its owned and leased buildings or move to a new location. He subsequently worked with the developer and base building architect on design strategies to satisfy the needs of both landlord and tenant. In addition to overseeing design, documentation and construction of the tenant improvements, Matt assisted the company in developing a new hospitality-inspired operational model and technology strategies that are fully integrated into the workplace environment.

Matt was the Project Architect who managed the international design team for Nile Corniche, a 2-million-SF mixed-use building in Cairo, Egypt that includes a luxury St. Regis Hotel, serviced apartments, offices and retail. He performed a similar role for the Mahler IV office building in Amsterdam, which is the European headquarters of the law firm Baker McKenzie, and for the Louwman Collection, the national automobile museum of The Netherlands. He was the Project Manager and Project Architect for the U.S. Embassy in Seoul, Korea, which included a chancery office building and staff housing, as well as a design school for Nishinippon University in Kitakyushu, Japan, among other international projects.